Do you ever feel as if you’ve boxed your own self in?

Do you ever feel trapped inside your very own life? 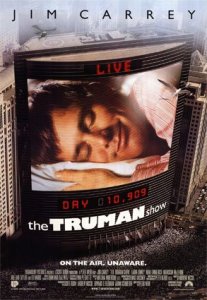 The movie is framed around the television show “The Truman Show.” Its main character, Truman Burbank, has lived his entire life since before birth in front of cameras for the show, though he himself is unaware of this fact.

Truman’s life is filmed through thousands of hidden cameras, 24 hours a day and broadcast live around the world, allowing executive producer Christof to capture Truman’s real emotion and human behavior when put in certain situations.

Truman’s hometown of Seahaven is a complete set built under a giant dome and populated by the show’s actors and crew, allowing Christof to control every aspect of Truman’s life, even the weather. To prevent Truman from discovering his false reality, Christof has invented means of dissuading his sense of exploration, including “killing” his father in a storm while on a fishing trip to instill in him a fear of the water, and making many news reports and ‘adverts’ about the dangers of travelling, and featuring television shows about how good it is to stay at home.

Without the help of an ‘external executive director’, haven’t we all single handedly invented our own means of dissuading our own sense of exploration? Haven’t we fought against our own inner urgings to do and be different by arguing with ourselves that our world as we know it is more comfortable and holds more truth than any possible worlds out there – outside ourselves?

Why are we so afraid to give way to passion? Why do we hold back? Why do we participate with just about 15% of who we REALLY are?

Ponder on these words by MARTHA GRAHAM, quoted by Agnes DeMille, in Martha: The Life and Work of Martha Graham [emphasis is mine]:

“There is vitality, a life force, an energy, a quickening that is translated through you into action, and because there is only one of you in all of time, this expression is unique. And if you block it, it will never exist through any other medium and it will be lost. The world will not have it. It is not your business to determine how good it is nor how valuable nor how it compares with other expressions. It is your business to keep it yours clearly and directly, to keep the channel open.” 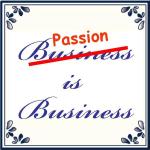 Passion is truth on fire!

And I agree with Martha. We all have talents and gifts that we alone can deliver in our own special way to those that need “our way” the most.

Think about how we are shortchanging the world by not being our best selves.

Truman finally discovered stairs that led to an EXIT sign and his own way out into the real world.

The question is – will we?