Old habits die hard – the saying goes – but why is that?

We’ve been told that it takes 21 days to change a habit. This I believe came from Maxwell Maltz. Originally a Plastic Surgeon, Maltz noticed that it took 21 days for amputees to cease feeling phantom sensations in the amputated limb. From further observations he found it took 21 days to create a new habit. Since then the ’21 Day Habit Theory’ has become an accepted part of self-help programs.

Habits help us through the day, eliminating the need to strategize about each tiny step involved in making a frothy latte, driving to work and other complex routines.

Bad habits, though, can have a vice grip on both mind and behavior. Notoriously hard to break, they are devilishly easy to resume, as many reformed smokers discover.

So what prevents sustained change? I asked this question of myself recently when I wrote a blog post a day for ninety days straight and then reverted back to writing spasmodically.

According to Ann Graybiel, Investigator, McGovern Institute
Professor, Department of Brain and Cognitive Sciences “We know that neurons can change their firing patterns when habits are learned, but it is startling to find that these patterns reverse when the habit is lost, only to recur again as soon as something kicks off the habit again.”

If a learned pattern remains in the brain after the behavior is extinguished, maybe that’s why it’s so difficult to change a habit.

According to Graybiel “It is as though somehow, the brain retains a memory 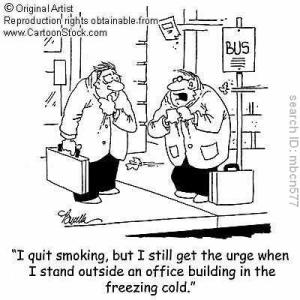 of the habit context, and this pattern can be triggered if the right habit cues come back. This situation is familiar to anyone who is trying to lose weight or to control a well-engrained habit. Just the sight of a piece of chocolate cake can reset all those good intentions.”

I think that what is important apart from the number of days to change the habit is to develop a ritual e.g writing at the same time of day every day.

I have heard of some writers simply putting on a baseball cap [fondly referred by them as their ‘writers cap’] in order to kickstart their writing process every single day.

The thing is – the more senses you can involve in the new habit, the more likely it is to become ingrained in your neural pathways. It’s helpful to use all the faculties of your imagination to include sights, sounds, smells, and the
senses of feeling and taste to strengthen the image which you come to associate your new habit.  In other words – bring your desired change to life – make it possible.

Napoleon Hill, in his classic Think and Grow Rich, talks about repeating your one burning desire – your definite Chief Aim in life – upon rising and upon retiring – ALOUD – and seeing yourself already in possession of that which you seek. Here we see the components of a ritual: same time, every day, rinse and repeat. 🙂

I won’t suggest trying to change too much at once but with this new found information, I am certainly going after blogging everyday as a regular habit.

One thought on “Why is Change so Difficult?”