I was reminded today by Timothy Ferris about the importance of setting goals and the reality of the world we live in today. To say that I was encouraged would be an understatement!

Hope his words have the same effect on you as they did me.

It’s lonely at the top. 99% of the world is convinced they are incapable of achieving great things, so they aim for the mediocre middle-ground. The level of competition is thus fiercest for “realistic” goals, paradoxically making them the most time- and energy-consuming. It is often easier to raise $10,000,000 than it is $1,000,000. It is easier to pick up the one perfect 10 in the bar than the five 8s.

If you are insecure, guess what? The rest of the world is too. Do not overestimate the competition and underestimate yourself. You are better than you think.

Unreasonable and unrealistic goals are easier to achieve for yet another reason. 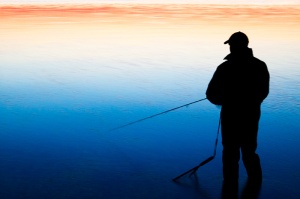 Having an unusually large goal is an adrenaline infusion that provides the endurance to overcome the inevitable trials and tribulations that go along with any goal. Realistic goals, goals restricted to the average ambition level, are uninspiring and will only fuel you through the first or second problem, at which point you throw in the towel. If the potential payoff is mediocre or average, so is your effort. I’ll run through walls to get a catamaran trip through the Greek islands, but I might not change my brand of cereal for a weekend trip through Columbus, Ohio. If I choose the latter because it is “realistic,” I won’t have the enthusiasm to jump even the smallest hurdle to accomplish it. With beautiful, crystal-clear Greek waters and delicious wine on the brain, I’m prepared to do battle for a dream that is worth dreaming. Even though their difficulty of achievement on a scale of 1-10 appears to be a 2 and a 10 respectively, Columbus is more likely to fall through.

The fishing is best where the fewest go. There is just less competition for bigger goals.