And so it is. Today is my birthday and for some reason, perhaps because the word “birthday” is in the lyrics I remembered 50 cent’s ‘In da Club’. Of course the only part of the song I really ‘heard’ or for that matter understood was: 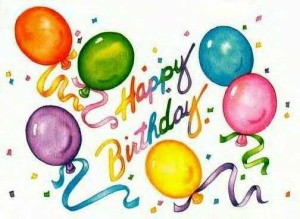 But curiosity got the better of me this morning. And because I now understood that there’s much more behind the words for 50 (I read the 50th Law – that’s how I know) I delved into the lyrics for some inspiration on my special day.

50 describes the good times…drinking champagne…the girls…the fact that although he’d been shot it didn’t keep him down…that while he thought some folks would be happy about his success…that they were the ones wanting to hold him back…that people would gossip that he was mad…but strategically he knew exactly his intention regarding the rap game…that there would always be haters around…but that’s ok because he was still in business and making money.

What stood out for me above all else were these two lines:

I’m feelin’ focused man, my money on my mind
I got a mill out the deal and I’m still on the grind

I feel focused today like never before. Money IS on my mind and all the good that I can do with it.

And hey I’ll be like 50 – even after the million – I’ll still continue doing what I’m doing coz that’s what God put me here for – and I’m having a great time!

Search by article name or category

Find stories about the challenges and joys of people (some you may have heard of, many…not at all), making a living, being WHO THEY ARE!