“If your mind is closed you become stagnant and any talents that you have will decline. By having a closed mind you will put yourself in a mental prison.” This was one of many nuggets that I discovered in Napoleon Hill’s ‘A Year of Growing Rich.’  As I mulled over this quote, I started thinking about how often we cease to make progress or grow in our lives because we are MENTALLY IMPRISONED.

John Maxwell shares, “The first year that I engaged in intentional personal growth, I discovered that it was going to be a lifetime process. During that year, the question in my mind changed from “How long will this take?” to “How far can I go?”

This is the question you should also be asking yourself right now—not that you will be able to fully answer it but it’s a start. It sets the stage for creating a vision for your life that allows you to grow as your goals and needs change. Darren Hardy, publisher and founding director of SUCCESS Magazine says “It’s less of what you NEED TO DO to achieve your goals and more of WHO YOU NEED TO BECOME.” 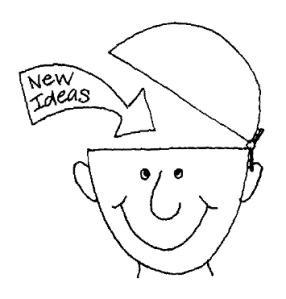 Millburn and Ryan Nicodemus share their experience in a blog post on growth: “When you see an apple at your local market, you don’t think of it as a dying thing. In fact, ostensibly it’s “ripe,” which makes you think it’s in some sort of ideal state. This isn’t true though. And as a person you are no different. Things might look great on your surface. They did for us: nice cars, big houses, high salaries, etc. But we were dying on the inside. Rotting when we appeared ripe. Unhappy. Unfulfilled. Unsatisfied with life.”

If you have EVERYTHING but still feel as if SOME THING is missing then you are probably dying a slow death and it could be in any area of your life: financially, spiritually, physically, emotionally or mentally. If you want to FEEL ALIVE then you need to grow. You simply cannot afford to live a life without meaning.

What have you wanted to do for the longest time, but haven’t been able to because you don’t have the time or the resources or the drive to do it? Eat healthier? Quit smoking? Run a marathon? Write a novel? Quit your soul crushing day job? Travel around the world? Start a popular blog?

“Nineteen years ago,” Seth Godin admits, “shortly after I hired Mark Hurst to join the team at my internet startup Yoyodyne, I turned to him and said, “I don’t think the web makes sense.” This was the most expensive mistake I ever made. It took me eighteen months to change my mind. Actually, that’s not true. It took me about five minutes to change my mind, after eighteen months of being wrong. I still remember how it felt to feel that flip switch in my head. This is one of the assets of youth, and something that’s worth seeking out and maintaining. That flip, the ability, when confronted with a world that doesn’t match the world in your head, to say, “Wait, maybe I was wrong.” That’s the essential skill of thriving in a world that’s changing fast.”

And yet despite all the money spent on workshops, short courses, books and guidance on doing things differently, business owners, managers, sales professionals and leaders still choose to maintain their fixed mindsets around how things SHOULD be done although the results aren’t where they want them to be. I recently got a call from an employee in a company I worked with extensively, and that person shared that things were pretty much the same despite my best efforts to help them turn the business around. This young enterprising mind, couldn’t for the life of her fathom how her senior managers had alternate solutions yet were still going about with a “business as usual” mindset. It was hurting her own performance with her team, she said, but her MD refused to change anything.

More than likely this Managing Director has a fixed idea around that situation. According to worldtrans.org a fixed Idea is typically a decision or conclusion the person has made on her own at some point that has set up an automatic way of dealing with life without any need to be present. It is one specific idea that is regarded as having great value for the person, but which she isn’t conscious of using. It is a way of being right. Often it involves making others wrong at the same time.

Are you STUCK on being RIGHT? Here are 12 signs courtesy Alli Polin, that you are:

Now ponder this: – What if you are sometimes WRONG? What if other folks have good ideas? What if you stopped judging and started listening more intently, suspending your skepticism for a wee minute? What if you didn’t DIG IN but LET GO? What if you lost a customer, a friend or an employee? What if because of your being so closed minded – you’re losing yourself? Is it worth it?