We’ve all been cynical at one point or other in our lives. We’ve all had to: 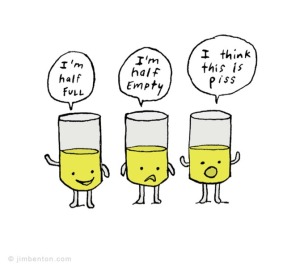 Cynicism is the general distrust of others or a lack of hope in people or their desires. At its worst, it becomes jaded negativity, contempt or scorn. “It’s part of a defensive posture we take to protect ourselves,” says Dr. Lisa Firestone. “It’s typically triggered when we feel hurt by or angry at something, and instead of dealing with those emotions directly, we allow them to fester and skew our outlook.”

I see quite a bit of cynicism in businesses.

Many owners think that it’s pointless investing in employees. That they’re never going to learn, are never going to change so why bother? They are cynical about methods or ways of doing business. Often I hear “that works in the USA. That CANNOT work here.” I’m not saying that one size fits all for anything but it’s the unwillingness to give it a try or even a bit of attention that makes me sad.

Employees don’t trust their bosses either. They view everything as manipulation. They’re doing this, to get us to do that. It’s a transaction. So therefore I am only going to do X. I am not going to put out any more effort than I need to. Perhaps if they pay me more I might…but for right now – I’m doing the bare minimum.

In my own life, cynicism has made me close-minded and bitter. Being cynical snuffs out all joy! Our sense of adventure and finding out something new is eradicated. What’s the point of having all the answers and knowing all there is to know? What then is the purpose of life if we already know what’s going to happen and how?

So for 2015 let’s promise ourselves that we’re going to move beyond certainty into curiosity. Let’s be open to clues and to whatever the evidence leads to. Dr. Bob Deutsch tells us “curiosity is a wondrous tool. When you are curious, you see the world as a place of endless possibility.” Being curious requires more effort than accepting things as they are. Yes there’s a strong sense of security in doing things the way we’ve always done them but where does that lead? Deutsch shares this experience:

“I had a boss, years ago, when I worked for the government who was extremely smart. He understood things about policy negotiation and program management that I’m sure I’ll never be able to understand, regardless of how curious I am. However he was a shadow of what he might have been, because he took an extremely lazy and uncurious approach to his work. When he was faced with a problem, his instinctual response was to fit the solution into the box of what he’d done before. He had a handful of approaches to challenges and he showed no interest in exploring new approaches. This had nothing to do with mental capacity; the man was extremely bright. He simply couldn’t be bothered and the result was that he accomplished so much less with his life than he should have.”

Which brings me to the second promise: we need to GIVE MORE of ourselves in 2015. Entrepreneur Craig Ballantyne assures us “Every one of us has something more that we can give. It might be money or time. Or it might be that you might have more love, more energy, more wisdom, or more experience that you can share with the world. You might be the person who simply knows the right thing to say at the right time. Maybe you’re the person that can shoulder the load when everyone else is collapsing around you.

He shares his own testimony “Trying to ‘out-give the Universe’ allowed me to have my greatest year ever in both my personal and professional life. I dropped my guard a little, gave more of myself, and it has resulted in deeper friendships, better – and exponentially less stressful – family relationships. Just imagine what this approach can do for you?”

We all could experience a more fulfilling life if we dropped our guard just a tad. When everything sucks, our curiosity falls to the wayside, making “being creative” more difficult.

To help foster his curiosity, Thorin Klowsowski took on Jason Fried’s advice to give ideas five minutes before he reacted to them. Fried explains how it clicked for him:

…I pushed back at him about the talk he gave. While he was making his points on stage, I was taking an inventory of the things I didn’t agree with. And when presented with an opportunity to speak with him, I quickly pushed back at some of his ideas. I must have seemed like such an asshole.

His response changed my life. It was a simple thing. He said “Man, give it five minutes.” I asked him what he meant by that? He said, it’s fine to disagree, it’s fine to push back, and it’s great to have strong opinions and beliefs, but give my ideas some time to set in before you’re sure you want to argue against them. “Five minutes” represented “think”, not react. He was totally right. I came into the discussion looking to prove something, not learn something.

Pushing back means you already think you know the answers. Asking questions means you want to know more. Ask more questions and whatever it is that you are blessed with, give more of it away in 2015. Give until you think that you can’t give any more. It will all come back to you, and more, many fold.

Enjoyed this post? Get future posts plus ideas that I don’t share on this blog emailed to you